We live in a world that becomes more interconnected every day. Language is a large part of this interconnection because it is the primary means for communication. We all want children to grow up in a world free from bias and discrimination, to reach for their dreams and feel that whatever they want to accomplish in life is possible. I believe that, we can raise children to celebrate and value diversity and to be proud of themselves and their family traditions.

The European Day of Languages has been celebrated every year since 2001 on 26 September, as an initiative of the Council of Europe in Strasbourg.

Throughout Europe, 800 million Europeans represented in the Council of Europe’s 47 member states are encouraged to learn more languages, at any age, in and out of school. Being convinced that linguistic diversity is a tool for achieving greater intercultural understanding and a key element in the rich cultural heritage of our continent, the Council of Europe promotes plurilingualism in the whole of Europe.

The European Day of Languages celebrates plurilingualism and encourages the 800 million Europeans in the Council of Europe’s 47 member states to learn more languages.

For the day, a range of events is organised across Europe: activities for and with children, television and radio programmes, language classes and conferences.

Modern foreign language education aims to develop multilingualism and intercultural awareness. In this theoretical framework, the foreign language can be used as a bridge among the students’ languages and serve as a tool to develop translinguistic competence.

This year, I decided to adopt and use in class, many of the activities, Lilika Couri had suggested in her “Tesol Greece 2012 Convention” workshop!

Actually, Lilika talked about the facts that, language is culture, FL broadens our horizons, and that ,WE teachers are the humanists who aknowledge the presence of foreign nationals in  our classrooms!

Lilika believes that ” we are the Stars of our microcosms” and therefore, we can make the difference!

Today’s classroom is more diverse than ever before. My classes consist of students coming from several different countries : most of them are Greeks but, I also teach childern whose parents come from Albania , Bulgaria, Romania, Russia, Hungary, the U.K ,even… India!

I ask all my students, who come from a different country ,to bring a CD with music  from their country ,which they wish to share with the rest of the class!

The child who has brought us the CD, has a chance to comment on what has been said and add anything else he/she wishes to.

Finally, I say ” I’d like to thank…..who brought us this beautiful music.”

This is an ideal activity for very young learners. I ask my students, to bring a stamp-or a postcard or even a flag- from the country they come from or any European country.

First, we practice ” I am from…where are you from”?

Later, children, holding their stamps, flags or postcards say in a chain “-I am from..Greece. Where are you from? -I am from ..Albania” etc

All I know about….

This is a good activity for older students. I personally used it with my 5th graders

I ask both Greek students and foreign students to do public speaking in front of their classmates  and share  3-4 facts about their country. These  can include, customs, traditions, a fairytale, historical facts, food, music, national costumes, sports, famous people, carols ..anything they wish to share!

4. “The postcard of my choice”-an oral project 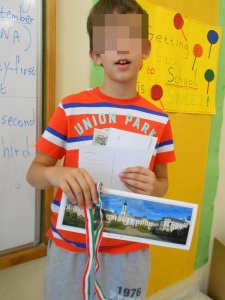 Alexander’s mother is from Hungary. he decided to bring postcards from that country !

This is a suitable activity for advanced classes…I used it with my 6th graders and it really worked!

Students are asked to bring postcards from their countries.

They tell their classmates why they have selected those specific postcards .What they say about their country, how  they  make them feel…

Lilika Couri, suggests that we ask our students to write the answers and send them to the teacher using “myBrainShark“.

My daughter, decided to travel to…..Hawai!!

I always finish our class activities, celebrating the “European Day of languages” with a special song.

Since the Tesol Greece 2012 Convention, I have used this  song several times , on different occassions, with success! Lilika taught us how to sing it back then and I  loved it, at once ! Here are the lyrics:

If I were a bird,

I would fly high.

If I were a bird,

I would reach the sky.

If I were a boat,

I would have sails.

If I were a boat,

I would ride the waves.

I don’t have a boat,

I can’t reach the sky.

If I hold your hand

And you hold mine,

I can make a boat,

I can reach the sky.

If I hold your hand,

And you hold mine,

We can make a world

With hope and smiles!

6. “Traveling the World with English”

I used this awesome drawing activity, with my afternoon classes! They hardly know the alphabet! They have been learning english for less than a month ..I am not their morning school english teacher!  I decided to have them try to dream about where around the world they would like to be traveling- speaking ENGLISH of course!! That drawing activity, was first tried with a bunch of special kids, by members of our local “English Teachers Association” board, during the “European Day of Languages” week ,  with huge success!

First,  ask a volunteer  student  to be a “tourist” who wishes to travel the World! Hand him a rucksack, a map, sunglasses, a camera, and ask the class to tell you what else might be missing…brainstorm words…..if they don’t finally  come up with the answer, tell them that it is  ENGLISH , which is an international language, spoken all over the World!

You may wish to write the word “English” on card and add  it in the tourist’s backpack ! Hand the rest of the class different cards ,which have  some clues on them having to do with  imaginary identities eg Name, Age,  Country. eg Ben, 9, Canada

Use a Globe and tell the class that the tourist is traveling the world , speaking english and making new friends.  Then ask the class to walk around the room, and introduce  themselves to the tourist and each other , asking and answering questions!

Later, spin the Globe and ask them to imagine, where the tourist might  be,  at the moment . Ask them to think about the place , the food, the sights, the people . I tell them that,  now it’s their turn to draw pictures from his   journey around the world, using their imagination .

When they finish, you can have  students talk about their  drawings , in front of the class.

Finally,  use clothes pins and hang the pictures somewhere in the classroom ,for everyone to admire!

I had found most of these few extra activities I have used in my classes, in a very interesting book called “500 activities for the primary classroom” ( Macmillan) . I had  to slightly change some of them, in order to suit the theme of the “European Day of Languages”.

The activities included, “Where is Ben” -using a soft toy- , “Fruit salad”- using the names of countries instead of fruit-, ” Duck-duck Goose”-with my 1st or 2nd graders, practising “hello”-“goodbye” or other greetings.

But, my most favourite one was

Prepare  two sets of cards: one set with the english words and one with the Greek words. I used only names of countries for this activity but, you could also use nationalities.

Have students make four groups of 4 or more people each .

Hand out the english words to the groups of students and ask each group to stand in one of the classroom corners, holding their cards.

Then , call out the greek words. The person with the english word , gets to sit down.

The first team with all the members sitting, is the winner! 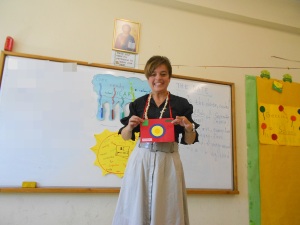 I used a handmade camera to talk to my students about my travels around Europe, speaking English-of course!