Maria, our flat puppet-ambassador in Spain

We have been working on a new etwinning project this year, called ” PupPETs- Pen Pals E-Twinned” , for which we had to create three  flat puppets ,  one for each  of our three European partners on the project. The puppets had to be flat and light to be enclosed in our parcels and be sent abroad! My students came up with several ideas but, when I inroduced them to the Flat Stanley idea, we all thought that… that was it!! That would be  the best idea for our etwinning project, too!

Athina, our flat puppet-ambassador in France!

Athina’s message to our pen pals, inside…

In case you’ve never heard the story, Flat Stanley had a bulletin board fall on him.  He wasn’t hurt at all, but ended up quite flat.  Luckily for us, he was flat enough to put himself in an envelope and send himself anywhere he wants!

Children can make their own Flat Stanley, and send him to various places around the globe.  I’ve seen pictures of Flat Stanley near a variety of landmarks and with a variety of famous people.  In fact, I’ve even seen Flat Stanley with the US President and on the top of Eiffel Tower!

Our flat etwinned puppets , is indeed a great project.

First, we made a flat puppet in class, representing our country and later, sent it to our pen pals abroad along with our first  letters.

We chose names for them ,before we  sent them out. They are due back at school,  by June 1st, so we have  started sharing stories on twinspace , on our twinspace platform ” PupPETs-Pen Pals ETwinned”.

It has been  a great project, so far …. We’ve  got  pictures and notes from our puppet- ambassadors abroad, from a variety of places. They have  been fishing in a river in Poland,  playing in a school yeard in Spain, touring France , even exploring new European  towns !  We haven’t seen all the responses yet, as the project is still on  and I suspect there are a few more coming in.  (Rumor has it our flat puppets are have been having such fun that they are  running late for our June 1st deadline!)

Orangito, the Spanish flat puppet in our class!

I’ll be sure to post pictures of our project and twinspace  when all the Flat puppets adventures have been revealed.  (I seriously can’t wait to see the rest, there were some FAT packages!)

Being the reflective person that I am, I’ve been wondering how I can make the project better for next year.

A student, reading Orangito some project work about our hometown!

I have been thinking about our next etwinning flat puppet-ambassadors project, already: I am going to ask my kids to create their OWN flat puppet each, with their face photo attached on its head and send it to their pen pal to keep till the end of the school year!

Students like to think that the flat puppets are..alive! They even take them to their desks, to help them with group work!!

Then, pen pals will have the chance to host their flat friends both in class and at home, take photos of their adventures in a new country, and both  upload them on twinspace  and send them to their pen friends by snail mail inside each class parcel. It will be loads of fun, I guess! Especially because, my students will be able to “travel” abroad , have adventures in a new country where it’s impossible for them to travel , especially under the financial circumstances in Greece! 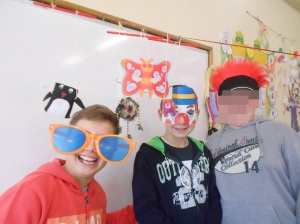 Bolek, Lolek and Pingu, the 3 puppets from Poland, taking part in our Carnival games!

Be sure to visit this website to learn more about what you can do with Flat Stanley!  You can even download your own Flat Stanley from it !

My 6th graders, talk to Orangito about our country!